THE Jamaican Government has received additional funding support for its Energy Management and Efficiency Programme (EMEP) through a €9.17-million grant from the European Union (EU).

This is being allocated through the European Union-Caribbean Investment Fund Facility (EU-CIF) and will serve to promote more efficient use of energy resources by the State that would free up public funds through the reduction of oil imports.

The EMEP will target a reduction in electricity consumption in public buildings and support capacity building for energy planning.

Finance and the Public Service Minister, Hon. Audley Shaw, and Director-General for International Cooperation and Development in the European Commission, Stefano Manservisi, signed the agreement formalising the grant allocation, during a ceremony at the Ministry in Kingston on February 2.

The money is in addition to loans totalling US$30 million that were provided by the Japan International Cooperation Agency (JICA), and the Inter-American Development Bank (IDB), which has been appointed administrator of the grant. Total investments in the EMEP now stand at US$40 million.
Mr. Shaw, in welcoming the EU’s allocation, noted that the organisation is the largest provider of grant assistance to Jamaica and “remains an invaluable partner in achieving our development aspirations”.

He pointed out that the Jamaica-EU partnership commenced in 1975 when the country joined the African, Caribbean and Pacific (ACP) Group of Nations, and since then, the organisation has provided over €1.2 billion in funding support, mainly grants.

Picture of Kingston by The original uploader was Blofeld of SPECTRE at English Wikipedia(Original text: W. Harris) – Image taken by an uncle of mine . W. Harris., CC BY-SA 3.0. 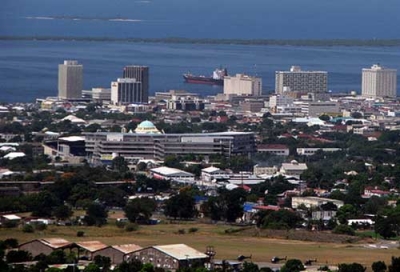