The new energy efficiency target for investor-owned utilities will more than double utility energy efficiency progress by 2025, reducing the state’s energy consumption by the equivalent of fuelling and powering 1.8 million homes. The energy storage initiative sets New York on a trajectory to achieve 1,500 megawatts of storage by 2025, enough electricity to power 1.2 million homes, and up to 3,000 megawatts by 2030. First announced as part of the Governor’s 2018 State of the State clean energy agenda, these energy efficiency and energy storage targets are vital to meeting New York’s clean energy goals.

“As the federal government continues to ignore the real and imminent dangers of climate change, New York is aggressively pursuing clean energy alternatives to protect our environment and conserve resources,” Governor Cuomo said. “These unprecedented energy efficiency and energy storage targets will set a standard for the rest of the nation to follow, while supporting and creating jobs in these cutting-edge renewable industries.”

“We’re investing in projects and programs to advance our aggressive energy goals across the state,” said Lieutenant Governor Kathy Hochul. “While the federal government has turned its back on energy initiatives to reduce consumption and greenhouse gases, New York is leading the nation to ensure a cleaner and greener environment for future generations and combat climate change.”

The Commission order adopts 31 TBtu of additional site energy reduction by the state’s utilities, above existing utility efficiency goals and toward the achievement of the 2025 target. This goal is inclusive of a subsidiary annual three percent reduction in electricity sales by 2025 and 5 TBtu of savings from the installation of heat pumps, which will help further reduce emissions from the heating and cooling of buildings in a cost effective way.

The initiatives resulting from today’s order will deliver direct benefits to New York consumers through new building retrofits, upgrades to heating and cooling equipment, and innovative technologies like heat pumps. The Commission has required a minimum of 20 percent of any additional levels of public investment in energy efficiency to be dedicated to the low- and moderate-income sector, helping to ensure that all New Yorkers have equal access to clean, affordable energy.

The associated reduction of carbon pollution resulting from this nation-leading initiative will bring an additional $1.8 billion in societal and environmental benefits and will continue to grow employment opportunities in the energy efficiency field. Energy efficiency firms employed over 117,000 people in New York in 2017, and employers expect jobs to grow by nearly 6 percent by the end of 2018. If this rate continues through 2025, approximately 50,000 new jobs will be created. NYSERDA plans to provide training to at least 20,000 potential employees in the energy efficiency industry.

In June, Governor Cuomo announced the State’s plan to jumpstart the development of energy storage in New York, calling for the deployment of 1,500 megawatts of energy storage by 2025, or enough electricity for 1.2 million average sized homes, while avoiding more than one million tons of carbon pollution.

To achieve the Governor’s goal, the Commission today adopted a comprehensive strategy to address barriers that have been impeding energy storage technologies from competing in the energy marketplace. These actions are intended to accelerate the market learning curve, drive down costs, and speed the deployment of the highest-value energy storage projects for maximum benefit to New Yorkers and the electric grid.

In addition to the 2025 goal, a secondary energy storage deployment goal of 3,000 megawatts for 2030 is being adopted, which was called for pursuant to legislation signed into law last year by Governor Cuomo. When implemented, the strategy adopted by the Commission today will establish a critical foundation for the emergence of this clean-tech industry across the state and support New York’s goal to create 30,000 jobs in this industry.

To further stimulate energy storage deployment across the state and spur private sector investment, earlier this week, New York Power Authority (NYPA) announced it will invest $250 million over the next five years to accelerate the flexibility of the electric grid to give New Yorkers greater access to renewable energy resources such as wind and solar power. This multi-pronged, collaborative effort by NYPA will harness the abilities of third-party providers to address key market and financial barriers, and accelerate implementation of 150 megawatts of grid flexibility projects and decrease market risk.

The Commission order also:
Authorizes a $310 million market acceleration bridge incentive to be administered by NYSERDA, in addition to $40 million announced in November for pairing storage with PV projects, and directs NYSERDA to file a market acceleration bridge incentive implementation plan; and
Directs the State’s six major electric utilities to hold competitive procurements for 350 megawatts of bulk-sited energy storage systems.

As more renewable energy resources, such as wind and solar, are brought online, energy storage will enhance efficiency of the electric grid to better integrate these variable resources. Importantly, energy storage will also enable these resources to meet periods of peak demand. Achieving the 2025 energy storage target will produce $2 billion in gross lifetime benefits to New Yorkers by reducing the reliance on costly, dirty and inefficient energy infrastructure, while also helping to scale up the clean energy industry.

According to a recent report by the American Jobs Project, New York is home to nearly 100 energy storage companies with expertise in hardware manufacturing, advanced materials, software development, and project management, and ranks fifth in the nation for energy storage patents due to the depth of research across its universities, national lab, and businesses. 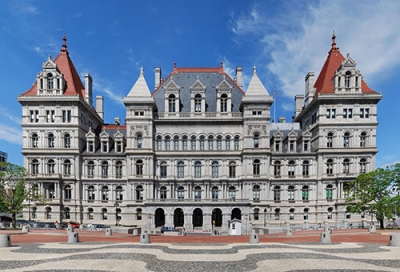